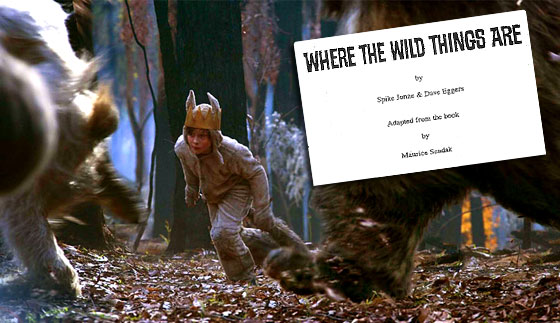 My excitement to see the film, Where The Wild Things Are, was deflated when I read some mixed reviews about it. I was not ready to suffer through another children’s film where my children and I leave the theater moody and quiet without any desire to discuss the film.

The film, Cloudy With a Chance of Meatballs, was a perfect example of a film gone wrong. The animation was incredible but the humor was embarrassingly flat and over done as if the audience was too stupid to get the point. The film left me feeling angry at the film industry and depressed about how the world has such potential but is filled with such mediocrity. Children want more than just incredible animation, they want emotion and a great story, just as adults do.

Thankfully, a friend recommended that I not take Tucker, my four year old. Admittedly, I am a bit lax when it comes to movie ratings. As long as I know that it is a great film, I don’t worry so much if the content is a bit sophisticated but on a few occasions Tucker has gotten scared and it has stayed with him. The last time we did this was at  the film, Journey to the Center of the Earth. If the clouds even threatened to storm he would start whimpering and I since then have decided that I need to be more discriminating.

Brevitt, Axel and I spent the last of our money on the movie tickets and smuggled in our candy and sodas. As the lights went down I whispered to them that it was not okay to break the rules but I didn’t see any harm in saving $20.00 by bringing in our own candy. In addition to being irresponsible with movies I am teaching them how to beat the system. I never said I was the perfect role model.

The opening scene was shot to Indian war cry music, from Karen O’s indie rock group the Yeah Yeah Yeahs, and my hair prickled on my neck, this was going to be good.

Spike Jonze and Dave Eggers did a remarkable job capturing the reality of life and the essence of the original 338 word book written by Maurice Sendak. Max was a boy, just like any other and he wasn’t out to save the world. He didn’t have answers for the monster’s pain and he didn’t make excuses for his faults.

How refreshing it was to see a movie that focused on character development and emotional value. By the end of the movie I was in love with Max Records and his character. I loved how he didn’t pretend to like Judith and I loved his reaction to her when she told him that if he were king he wasn’t allowed to play favorites and he wasn’t allowed to talk back to her, even if she was a pain in the ass. Most boys do not respond well to high emotion and his way of handling her was no different than how my ten year old would have reacted, in fact Max reminded me of all my boys put together. His destructive behavior when he was angry was Axel, his imaginative play and fearlessness was Brevitt and his wildness was all three at any given moment.

As I sat there in the theater with a huge lump in my throat and tears streaming down my face I was overwhelmed by how expertly the movie exposed the love and emotion that occurs between a mother and her son.

Walking out into the light of day I couldn’t help but hug my boys so completely. I love having them with me to witness great pieces of works and get their thoughts on everything.

There is so much for me to show them but I want to do it now, while their minds are still so creative. If only I were courageous enough to sail away with them and explore the wonders of the world, monsters and all.

What to Do with your Kids on a Snow Day?

What to do with Kids in Basalt