Am I a Goddess? - aspenreallife

Am I a Goddess?

Most of us don’t wear pointy, golden brassieres or sexy tight cat suits so it may not be so obvious, but I am convinced that all mothers are either Super Hero’s or Goddesses. As far as Goddesses go, I am no Helen of Troy or Hestia. Let’s just say that I’m more of a cross between Hera and Aphrodite with a little Medusa thrown in.

In the past three months my superhuman powers have reached dangerously high toxic levels as I managed to  survive four birthdays, an attempted anniversary celebration and Halloween. Throw in a few child medical emergencies, struggling finances, a bronchial cold that nearly killed me and the full moon, and there you have it, Goddess extraordinaire straight out of Greek Mythology. Like the Goddesses I have accepted my fate laced with imperfections and obstacles that I must overcome.

I read an article in the New York Times that said that screaming is the new spanking and I couldn’t relate more. The boys have a difficult time settling down in the evenings and the crazier they get the louder Wade and I become with our shouting. Yes, I know that yelling at your children is ineffective, most of the time, and only causes them to withdraw but I honestly feel that sometimes they need a little shout for them to actually hear my message.

On a good day I am an Opera singer, hitting a high note and holding it until they stop their monkeying around to curiously find out what the hell is making more noise then they are. On a recent predominantly bad day, I was less attractive in my mode of discipline. I had absolutely had enough of being manipulated by my incredibly obnoxious wild things and so I yelled out, “How much do you think that mommy and daddy will take of this behavior before we decide to move out?”

Let me explain for a moment. The impetus for this comment was the children’s book that I have been reading to the boys at night titled, The Willoughby’s, by Lois Lowry, and the excerpt that I cannot seem to shake is the following:

Quote
“Dearest?” “Yes, dearest?” “Do you like our children?” “Oh, no,” Mrs. Willoughby said, “I never have. Especially that tall one. What is his name again?” “Hes’ the one I least like. But the others are awful too. The girl whines incessantly”. “I have a plan,” Mr. Willoughby said, “It’s thoroughly despicable.” “Lovely”, said his wife. “A plan for what?” “To rid us of the children.” “Oh goodness, do we have to walk them into a dark forest? I don’t have the right shoes for that.” “No, this is a better plan. More business like.” “Ooooh, goody. I’m all ears,” she replied with a malevolent smile.
I felt badly when all three boys broke down into tears after I said it and I tried to explain my outburst individually to each child. I was stroking my middle child, Axel’s, soft hair and looking down at his sweet face when he asked, “Why would you ever leave us?”

I wanted to jump out of the window of my office for failing so miserably as a mother, but the window is on the first floor of the house and I would feel really silly if I did that, but the point is, why couldn’t I have delivered my message without upsetting them so? I told him that enough was enough and that they needed to give their daddy and I the respect that we deserved as parents and calm down when it was time for bed.

If only I truly were a Goddess, I could cause a mini cyclone as a warning in the midst of their rough housing or maybe I am a Goddess and haven’t fully tapped into it yet. After all, I have been known to be fierce, loving, warrior like, sexual and even narcissistic at times.

So, move over Zeus and make a well deserved seat for me on Mount Olympus and while you’re at it hand me over one of your lightening bolts. 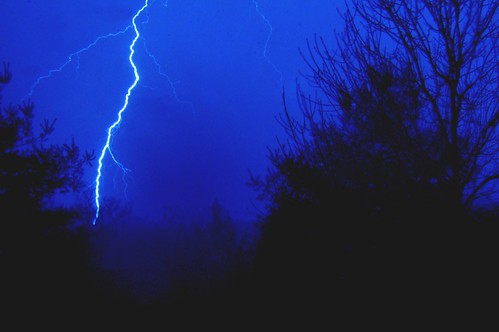 A Mother Gives Thanks