Ohhh baby, gimme some of that good stuff

Chef Rob Zack serves his roasted lamb with a smile

An? Aspen Magazine and Viceroy Snowmass party to honor the launch of Aspen Magazine’s Summer Food and Wine Issue, and what a launch it was!

Gretchen and I descended the stairs pretending that we had not just valet parked Vini-man. Kicking back a well deserved chilled shot of tequila, delivered fresh off of the ice luge, I couldn’t help but notice that short jumpsuits had come into fashion, another trend like? crazy leggings with short shirts and stiletto booties that I think I’ll pass. I had a flashback to my New York City days where fashion and a bulging wallet were a large part of my? existence.

I was so thankful to have Gretchen with me who wasted no time in finding Cary, the effervescent champagne connoisseur who made sure her glass was never half full.

I tried my best to work the party but realized that I still have not figured out the best way to inform people of my new career path, “I have a blog,” I say and am met with a blank stare, And? And, IummmI write stories about how I am confounded by my three boys. Annnd I have a new local series where I film and interview locals because I find them so fascinating. Oh and I am a? travel writer where I stay at five star hotels with my family and when they don’t feed us and we bring our own meals, since we can’t afford to eat in the restaurants and, and, andno I have not made any money yet, I mean I have made money but I have not been paid yet and I dont know when or if I will get paid and I really dont know where this is going or how long I can keep this up. By the time I finish either they are really curious and ask for my card or their eyes are glazed over and they touch my arm like it’s been real and pretend that they see somebody in the distance that they need to talk to and then they run off.

We made our way to the hotel’s General Manager, Jeff David, who is becoming my new idol. Jeff is adored by his employees and takes perfectionism to a higher level. I mean, in all my days of traveling throughout Europe as a young girl I never experienced such a smorgasbord of delicious food at a hotel, okay maybe the Sonnenalp Resort of Vail’s Mother’s Day Brunch is a big contender but the Viceroy definitely exceeds all expectations.

Gretchen and I drank our drinks and, without stopping our conversation, delicately reached out to the food trays passing by with pork sandwiches and creative hors d’oeuvres such as Asian soup in a cup. We decided we should be more social and got up to get in line for the buffet. The food was outrageous. My favorite dish was the jalapeno flat bread with tzatziki sauce and the best eggplant I have ever tasted.

When we were finished we noticed that Chef Francis Mo was serving copious amounts of sushi at Nest and so we went in to have a second feast. After a few more glasses of champagne and tequila we went to the dessert buffet bar and I almost wept over Ashley’s Smores served in a shot glass. I didn’t even need to eat it, just looking at it was a mouth watering experience.

When we finally reached Jeff I wanted to tell him that I was ready to jump aboard his ship and become part of his staff, if he would have me.? I was in desperate need of making money.

We walked the party and I did my best to promote my business but it is so much more fun to find out what everybody else is doing to survive in this economy.

The following are photos of some of Aspen’s local entrepreneurs:

Susan and Glossy from Walker and Gull Designs, the best dressed women at the party (other than Gretch of course)

Dean Weiler from EatAspen and his wife Katrina Strecker from StreckTech

Aaron Kyle Behrens with his wife Lauren. Aaron is the lead vocalist and plays guitar for the band Ghostland Observatory. He played at the X-Games. 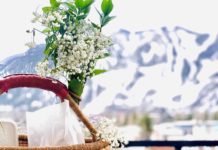 June 19th – Let’s Spend the Night Together…with the Stones at...

Bar Hopping in Aspen in October