As a child I always had this image in my head of my dream husband (probably because my father was always going on and on about finding a husband who would take over his job of taking care of his three girls). I imagined this man I would fall in love with one day as loyal, true, solid, funny and of course, gorgeous, like Carey Grant (only straight) with a chiseled jaw, smiling eyes and well groomed.

But I was thirty-one and all the men in my life had not been THAT guy, and here I was still single in a party town wondering why the hell I had not taken finding that man more seriously these past ten years of my life.

I was sick and tired I was of that expression, “When you least expect it, it will happen.” I was always expecting it, who wasn’t?

When I first arrived in Aspen from New York City back in 1990, I was heart broken that the man from my previous relationship felt it okay to try and seduce another woman in a hotel room without my consent. I was, to say the least, despondent and frustrated. With a total disgust for the male race I wondered how I would ever find a husband. The word spinster kept floating into my head, and so I looked it up and according to the dictionary, “A spinster is a legal term for an unmarried woman, aged 38 or over. The term spinster originally identified girls and women who spun wool.” The word “Shit” came to mind, followed by a, “I’m screwed. In no time at all I’ll be a spinster and I cant even sew.”

It occurred to me that perhaps Aspen was not the smartest place to be if I was hoping to ever get married. Aspen was a place where boys and girls gravitated to play and stay young and defy their parents and the worlds expectations of them. But this was just a transitional phase until I could figure out where to go.

Any boy I fantasized about, okay, slept with, was absolutely and positively no good for me, ask my sisters. It was time for me to leave this fantasyland and move to a real city with real people who were not trying to escape reality, but first I would stay for one of my favorite seasons, Fall. Ahh Fall, filling me with the excitement that something magical was about to happen, replacing all fears with a sense of adventure. And as the golden leaves on the Aspen trees began to fall I thought, how I can I leave before getting a chance to strut my stuff on the ski slopes? I made a promise to myself to take off in the spring.

And that is when I got the phone call from one of my best friends planting the seed for a new adventure that would rock my world….(more later). 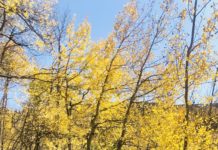 Mercury in Retrograde and Leaves of Gold