(The boys with Alex and Ben)

As a precursor to my post on the C Lazy U Guest Ranch and Spa, I thought it pertinent to publish a guest post from one of the boys’ favorite counselors at the ranch, Alex Seedman.

Alex fast and furiously became an extension of our family and so I felt it fitting that he, also a writer, voice his love for the ranch for all of us here at Aspen Real Life:

There is something dangerously romantic about the American West…the picturesque views of epic mountain peaks that run for miles, the powerful relationship between man and horse, the endless list of western myths involving daring bank robberies and death-defying chases through Indian territory. To me, though, the most dangerous and most romantic facet of this pocket of America is The Great Escape. It’s the stark contrast between suburbia’s rut and a horse’s unpredictability, a skyscraper’s man-created height and an escarpment’s God-built beauty, and the danger of getting hit by a taxi on 42nd street and getting bucked off your horse because of an unspoken quarrel.

I’m from the uber-white bread, super-affluent, and mostly-comforting town of Highland Park, Illinois. I go to school at New York University and study alongside some of the most wonderful young talent to one day grace this world’s cultural landscape. So, I’m lucky. I have little to complain about, and therefore even less to escape from. And yet, here I am in Granby, Colorado, spending my first summer out of university at America’s finest dude ranch. I’ve been a guest at this ranch for just over a decade, and just last year, I decided I would either not return until with my children, or come back as an employee. And here I am, sitting in staff dining, meditating on my incessant need to be here.

I remember an adventure two years ago. On a camping trip with some fellow ranchers, we got bored sitting around a fire. So what to do? Why, let’s climb under a barbed-wire fence, hike across a meadow of dandelions and scale a cliff normally reserved only for a horse’s sure-footing. As we came up to said cliff, aptly named The Garden of the Gods, my little sister (a newly-recruited member of the teen group) began to complain. I didn’t want to listen to her, mostly because what she was saying was completely logical. We had no brand-name safety attire, much less any equipment at all. The sun was about to set and the bugs were ruthless. Still, in an effort to impress my fellow cowboys, I told her to quit yapping and follow me. So she did, because she loves me and knows how much I love her. As my hand grasped the first rock, I felt the Aveno moisturizer slip right off my palms. It was as if a barrage of cuts and bruises magically appeared on my body, and I was proud of them for challenging the comforting norm. Higher and higher we climbed, and as we did, I saw less and less of my little sister. She disappeared behind one side of the cliff. I cried out to her, and all I heard was a barrage of curse words I didn’t expect her to know. Just as I emerged from my side along with my tough cowboy friends and she emerged from her side all alone, I saw a sight most brilliant and overwhelming. The sun was setting over the logging road, and across from that view was a collection of clouds gracefully reflecting that light. My expression of exhaustion and her expression of anger disappeared in that orange light and there was nothing but a very real beauty at the Garden of the Gods.

And that’s why I’m here; for a beauty not created on a stage or in a book, not in a building or on a big comfy couch. I’m here for The Great Escape of the American West, an escape involving a night sky so full of stars it looks more white than black, an escape involving no moisturizer but dirt, and perhaps most importantly, an escape involving a relationship between me and the trees, mountains, meadows, and sky. C Lazy U never ceases to deliver that experience so I look forward to spending many more weeks of my life here at the ranch.

(Alex with the sisters) 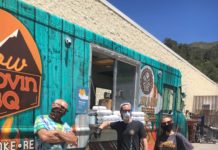 Losing Everything Because of Madoff