An Interview with Eoin Finn at Wanderlust Aspen-Snowmass

I’d like to thank Eoin Finn for helping to dissolve my shyness and willingness to stay insular while in yoga practice, and insight me to throw all inhibitions to the wind in his blacklight “Yogi Rockstar Classic Rock Vinyasa Flow” class during Wanderlust Aspen-Snowmass 2016.

In 1999 Eoin founded Blissology, a yoga system that mines for the source of love inside of all of us that is especially evident when we are quiet and present in Nature.

A Blissology Yoga class strikes the perfect balance between our ego drive and the infinitely kind and wise side of ourselves so that we treat our bodies, our communities and nature more sustainably and with more reverence.

Being in Snowmass surrounded by people who practically live outside, Eoin expressed in his interview his passion to bring spirituality down to earth and reclaim quiet time in Nature as the greatest spiritual portal and our best source of health and happiness.

An ocean-activist, he started the “Blissology EcoKarma project” in 2014 raising aid and awareness through yoga and activism for the world’s precious but imperilled coral reefs.

Remember that I missed a few classes that first day? Well one of the classes I missed was Eoin’s “Sweat Your Intentions”. A class I heard about for days after where those who had taken it would go into a dreamy state describing how it was absolutely fantastic. Funny how life works that I should have missed his serious class and landed in his class that was all about sharing the love, and rocking out while being guided to another place, similar to when your having wild sex and can’t remember how you got into a certain position, or at least that’s how Eoin described it.

As I experienced Eoin’s class his positive and energetic vibe rubbed off on me immediately and as soon as the white lights turned to purple in his class, I stripped down to my yoga pants and jog bra and went tribal with the help of spiritual graffiti gangsters who covered my skin in tribal symbols, bringing my inner love-warrior out. Next thing I knew I was dancing half-naked with other yoga practitioners.

In the interview shown below you will see that Eoin’s Blissology practice is modeled off of Joseph Campbell’s wisdom and his quote, “Follow your bliss and the universe will open doors where there were only walls.” Seems like a good quote to base your life on, don’t ya think?

A philosophy graduate, yogi, surfer and blissologist from Vancouver, BC.  Eoin has been deepening his understanding of Meditation, Yoga + Eastern Philosophy since 1989. His commitment deepened in the mid-nineties when he moved to Maui and learned Ashtanga and Power Yoga, and later Vinjana Yoga.

Eoin Finn’s Life Mission
To stay in touch with the deep vibration of Love so that I can be a conduit for it in all I do in life. I want to inspire people to be continuously lit up by this mysterious but powerful force.  One of the best ways is to get out in nature and let its beauty fuel you.Eoin Finn

His visionary writings about health, happiness and interconnection have appeared alongside noted authors Deepak Chopra, Prince Charles, and Eckhart Tolle, and include features in Vogue, InStyle, Yoga Journal and Oprah Magazine.

Fusing his passion for athletics and yoga, Eoin has prepared over 100 Olympians as well as pro-athletes from around the world for high-levelcompetition.  Eoin’s teaching offers a heart-opening, invigorating and experiential practice, grounded with humour, dynamism and a focus on both physical and energetic alignment, not to mention some great yoga grooves inspired by his love for surfing and the ocean. Yoga, when practiced with this holistic awareness becomes fluid therapy, movement guided by the innate knowledge of our anatomy and evolution

I should emphasize that although I have/had difficulties enjoying physical contact with strangers in yoga (we’re not talking college days people) I have no problems making friends with happy people, and Eoin Finn is definitely my new BFF. I mean seriously…how can you not love somebody whose mission is to be a conduit for love?

Eoin mentioned that he checked out my site and that I too am a Blissologist. I think he’s spot on. If you too are a Blissologist than join Eoin in exploring strategies for bringing more joy, awe, love and bliss into your life.

Read the Blissology Happy Map for more about Eoin’s core philosophy, and remember, you have to genuinely believe in your bliss to become a blissologist. 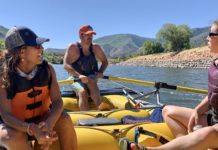 Living in the Moment