It was an incredible Aspen Business Connect launch at The Snowmass Collective celebrating two teen artists who have been Tapping Into their Creative Edge for quite some time now in the Aspen High School art room with Stephanie Nixon and Diane Heath as their trusted teachers, and guides.

The Aspen High School Visual Arts Department submitted 145 works of art to the Scholastic Art and Writing Competition. There were 6,000 total entries for the state of Colorado including 2,200 students. From these submissions, students from Aspen High School won a total of 18 awards, including two students nominated for the National American Visions Award. There were only 5 students nominated in the state, and two of them are from Aspen.

The Gold Key Award winners and American Vision winner will go on to the National Scholastic competition, adjudicated on March 16th. National Gold Award winners will have their work on display at Parsons – The New School. An award ceremony will be held at Carnegie Hall in New York City in June. 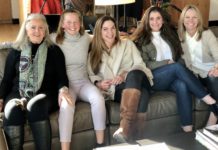